I’m still not sure whether The Next Web Conference is a tech conference which feels like a festival or a festival which disguises as a tech conference. Anyway, apart from the music, great barista made coffee, the fancy food stalls and the sunny terraces with hip furniture, the talks during the 2018 edition were amazing! It’s the only conference where I get to learn from every single talk. Not surprisingly though, since they’re done by the brightest minds, from the most successful companies and the most revelatory startups and scale-ups.

I missed out on a lot of talks this year. Despite the fact I really tried to cramp as much talks, workshops and roundtable sessions in those two days, there was no way I was able to see all 260 (!) speakers.

Yet, It’s amazing what I learned from the 15+ talks, 3 workshops and 2 roundtable sessions I was able to attend.

Sifting though all the materials I collected and reminiscing what I heard, I could tell three distinct lessons about using tech to innovate and change your company for the long run. Some speakers put them in a prominent spot during their talks, while others pointed them out in a more subtle way, but all three somehow intertwined with the majority of events I visited.

I’ll share all three with you in separate articles this week.

Design is just about THE most important feature if you want to go digital, use technology to create a new product or improve an existing one.

You’re already using Design Thinking? Kudos to you and your company! But it won’t get you anywhere if you’re not taking into account the following:

It was an almost continuously returning message during several TNW talks and workshops. Even talks outside the obvious Design Thinkers track were clear on one thing: design is just about THE most important feature if you want to go digital, use technology to create a new service or product or improve an existing one.

I guess there are two reasons for the heightened importance of design:

Is it time for a Chief Design Officer?

According to Renato Valdés Olmos, we need to think about introducing a Chief Design Officer into the C-suite. It did remind me of the way Steve Jobs lead Apple. After all, it was him, the CEO, who introduced a relentless focus on design and by doing so hurled Apple into a very bright future. As a company, you simply have no choice but to ‘technologise’ yourself soon and turn at least a little bit into Apple. Does that mean we all need to rethink the role and place of design and put it in a more prominent position within our company just as Steve Jobs did? After this TNW conference, I guess the answer has to be ‘yes’.

Not everybody is a designer, yet we need everybody to be part of the design process.

By bringing in people from sales, development and ops, everybody gets to understand the patient needs.

Carolyn Rodz, Elisa Jagerson and Simon Oliver Ommundsen are just three examples of speakers who stressed the importance of inclusive design. Whenever Simon’s company designs and tests the prototypes, it’s not just people from the obvious design departments who go to test those with their customers, but also people from sales, software developers, people from operations… Only by doing so, everybody gets to understand what the patient needs and by combining their personal points of view on possible solutions, they are able to deliver really value adding products.

During their workshop Winning with Digital Business Building, the consultants by McKinsey definitely agreed as well but for another reason: it removes resistance. A technological business means change and change means resistance. Be open to everybody, invite them to join the team and show them there’s a place for all. If they don’t have the right skills yet, teach them. It will not only improve your team and the outcome, but also facilitates the adoption.

White male programmers create white male products. That’s a (frankly rather bold) partial summary of the talk by Carolyn Rodz. Diversity when designing a product means attracting more people and removing biases from the design. She used the example of just one button on her website, which nobody dared to use, until just a slight modification of the text it displayed. This, and other examples, shows how design impacts behaviour of people with specific backgrounds, race or gender.

Diversity is not only indispensable to build steller products, but is also an obligatory prerequisite for building stellar tech teams.

Diversity is not only indispensable to build steller products, but is also an obligatory prerequisite for building stellar tech teams. Research by Eva de Mol (who quoted from her findings) was very clear on one thing: conflict is essential. She did make a ‘but’: just as long as it’s task related. Personal conflict kills team dynamics and is not something you want. So don’t be afraid from diversity and possible conflicts, see them as unique opportunities. 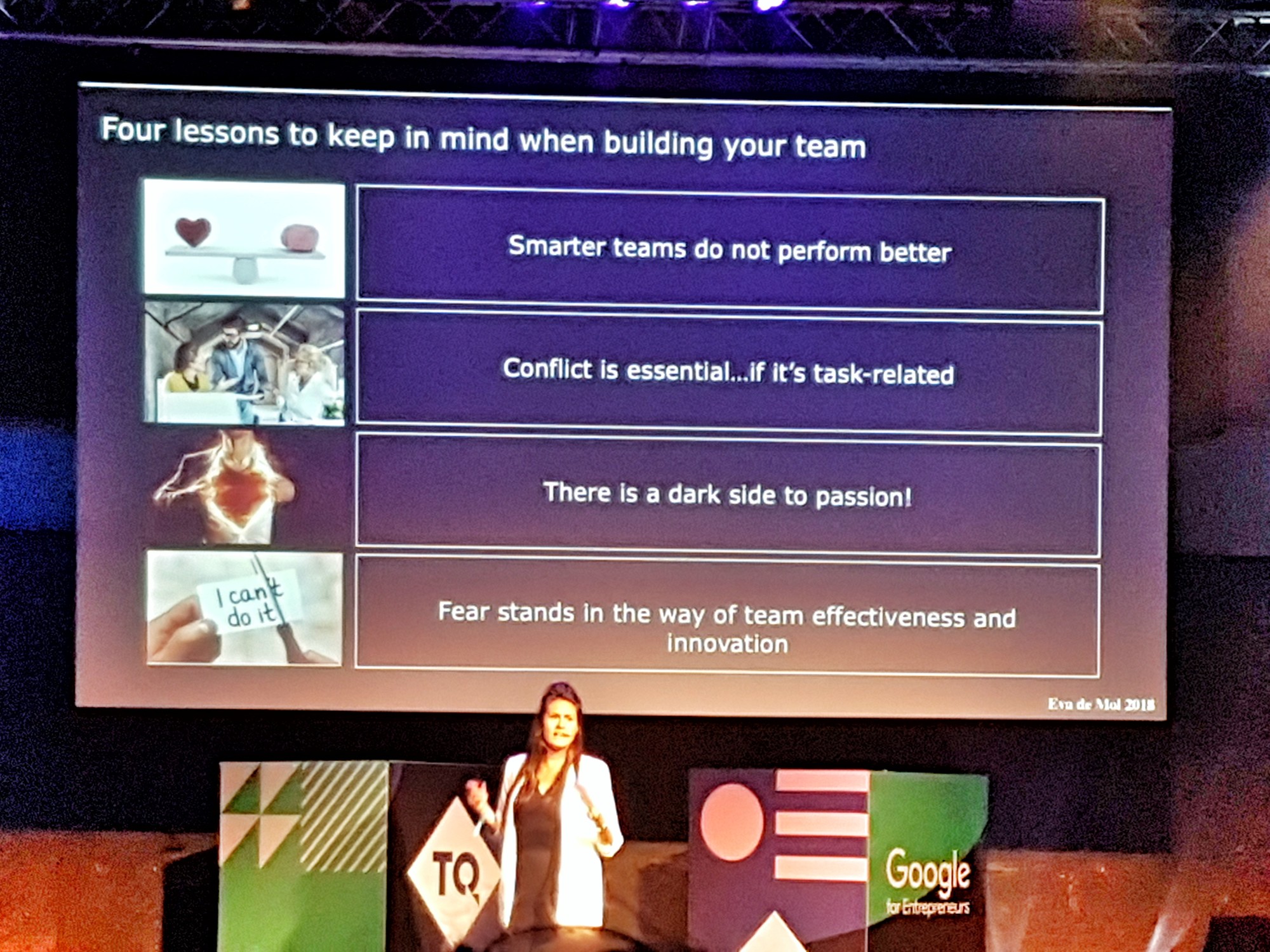 Design is NOT about happy customers

We actually have a very poor view on customer satisfaction and emotion: we only want HAPPY customers. But do all customers want to FEEL happy?

The talk by Elisa Jagerson struck a nerve. She showed how finding out the emotion your customers really want, creates totally different products and services. Her approach: find out this wanted emotion first, then (and only then) map its score on the customer journey. She used an example of a coffee shop who first focused on happiness and discovered the moment the coffee cup was handed over scored below average. But then they found out it was not about happiness at all what the customer wanted! Instead, the customer wanted to feel worthy. Mapping this emotion onto the customer journey showed a dip during a different moment: the visit to the toilet. 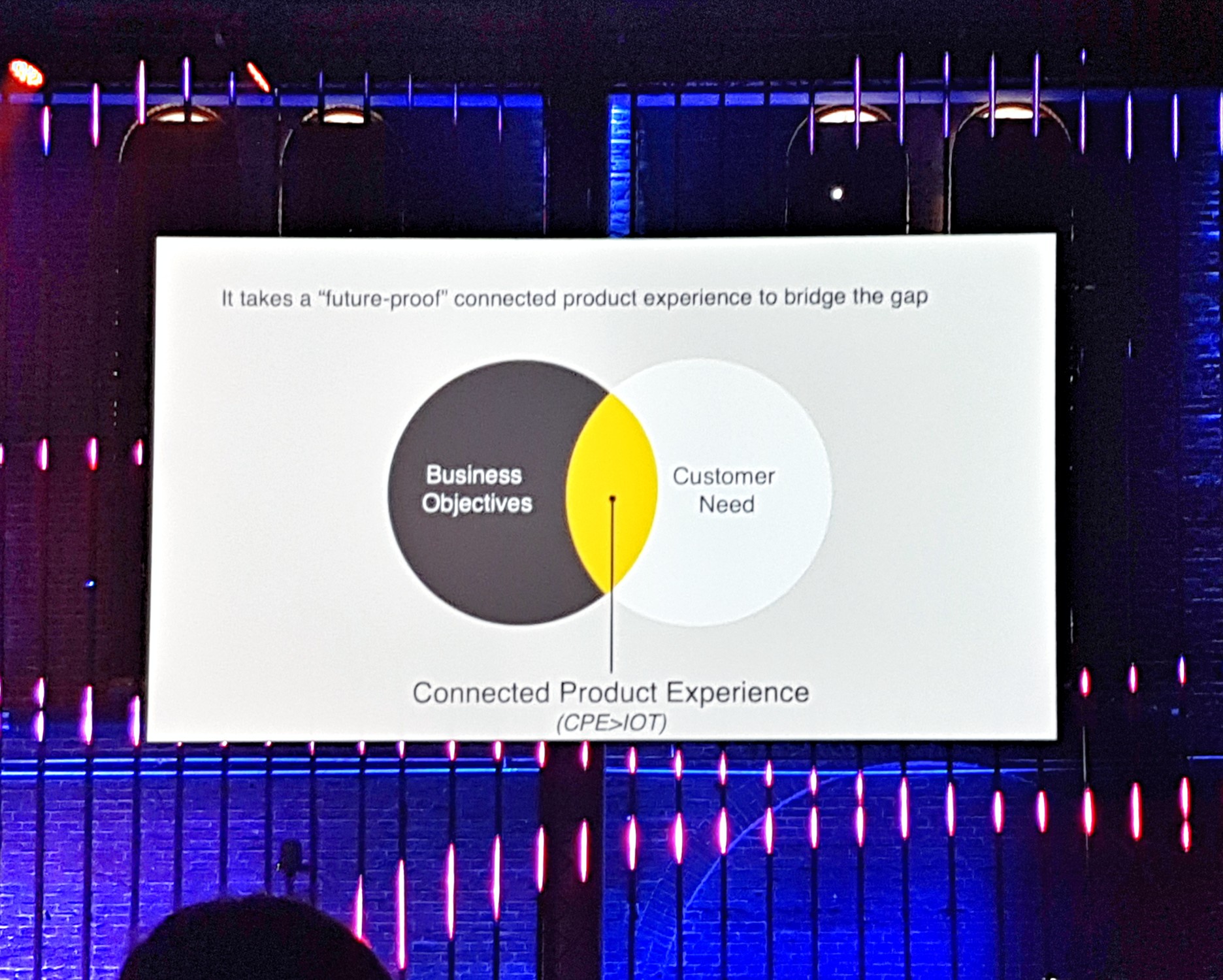 Another example was when working with Google and a global Health care company on redesigning a new diabetes type 2 product. All parties involved focused on informing the customer and an emotion of security (control and enablement). Instead, the driving emotion the customer wanted was to be free.

Both cases led to dramatically different approaches when designing the improvements needed.

It’s been two years already since Microsoft announced chatbots to be the Windows of the (near) future. No cell phones, no apps, let alone laptops. It’s going to be our personal voice assistance which will take over and perform many of the tasks we currently perform ourselves. As Google showed the latest status of chatbots during their developer summit two weeks ago, Microsoft’s own Purna Virji took us along the dirty details of what it takes to design a great chatbot experience, or conversational AI as she called it.

From the era of visual UX, we now enter the era of conversational UX.

We’re not talking about the technical details here: its all about what the conversation should look like when talking to your bot. What a bot should say, what not to say, how to say it, when to say it, etc. For the past few decades and especially the past era of apps, we needed seamless visual UX. For our bots we need seamless conversational UX.

Purna shared with us some very practical and entertaining examples of ‘do’s’ and ‘don’ts’ which illustrated her 4C’s framework: offer Clarity, Character, Compassion and careful Correction. Useful additional advice included developing different conversational scenario’s, like chitchat conversations (part of the Compassion ‘C’) and ‘sorry not sorry’ scenario’s (part of the Correction ‘C’). 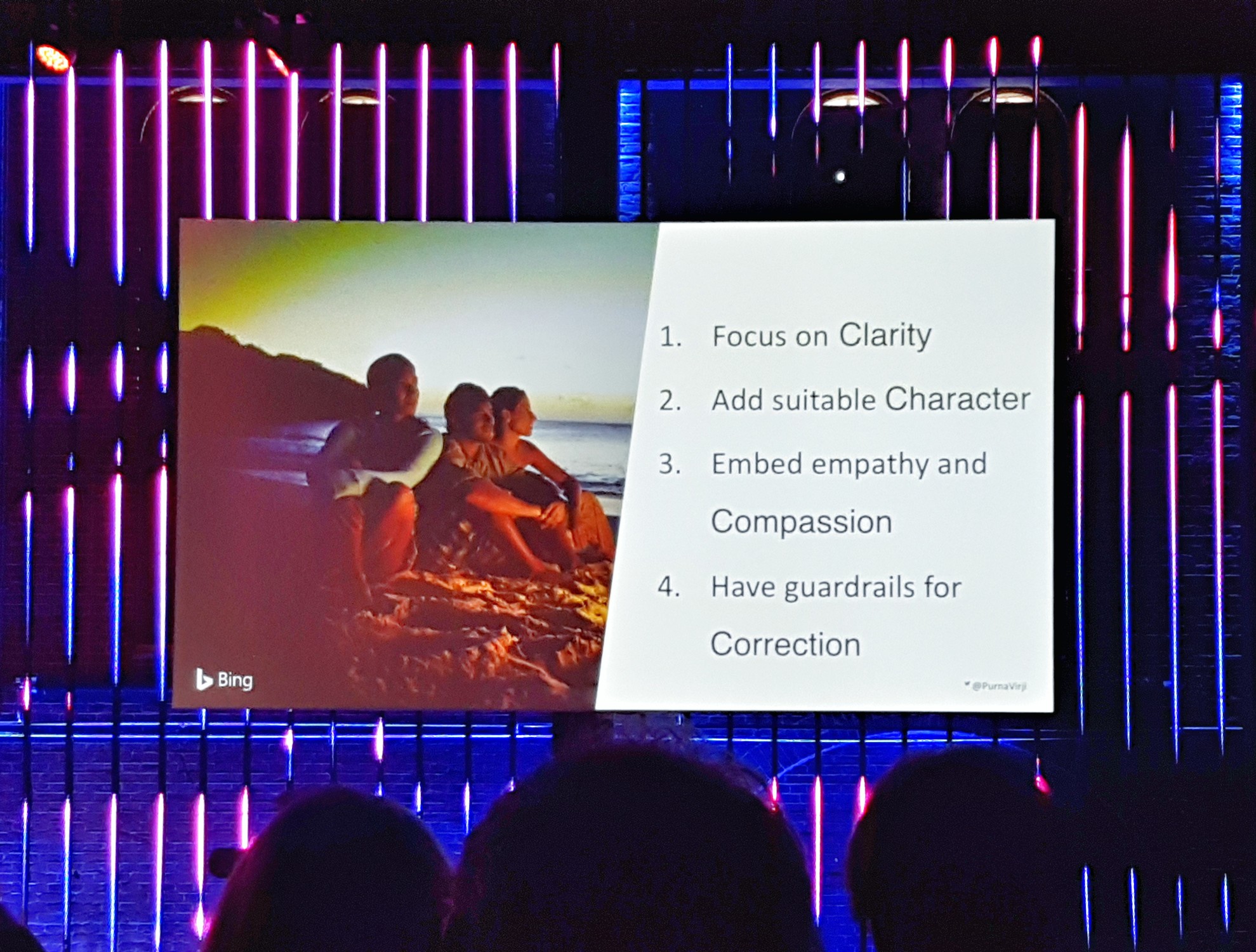 If you have design where it needs to be, continuously check if it’s in sync with the current state of technology.

While technology changes, the way it’s designed changes as well. If you haven’t put design on a pedestal already, you should do it fast. And if you have design where it needs to be, continuously check if it’s in sync with the current state of technology.

The next article will be on Emotional AI.